The Fears are supernatural entities that stalk and kill and corrupt. They are called Fears because they are each based on different types of fears - the Cold Boy, the first Fear I wrote, was based on the fear of isolation, of being cut off from others, of becoming a cold person. Other Fears filled similar roles.

When we started writing the Fear Mythos, I realized that a lot of creepy stuff on the internet was based around "creepypasta," short horror stories that were copy-and-pasted places. Some were creepy, some were filled with narm. In any case, I decided having a place for Fear Mythos creepypasta was a good idea, so I made the blog Faces, Strange and Secret.

Then, about a year ago, people in the community had an idea about putting together an anthology of stories from the blog. I thought "Why not?" I didn't just want all the stories to be from the blog (because otherwise, who would buy it?), so I solicited for more stories and more stories and, well, now the anthology has sixty-three stories in it and is 380 pages. Yeah. 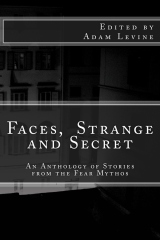 Here it is. I created it through CreateSpace. There is also a Kindle version and one on Smashwords in case you don't have a Kindle but still want the ebook version.

I am incredibly proud of this. Because, well, I started and finished it. I put it all together, even made a few illustrations for it.

So yeah. I made a book. If you like horror, you should definitely check it out.

I'm still not dead. I just stopped using LiveJournal. I sort of have a Tumblr now (gasp, shock, omg). Here it is.

Anyway, I remembered my password to here and was feeling nostalgic due to the Veronica Mars Kickstarter. So I thought I might repost the thing I made for Tumblr over here.

I'm not. I probably need some fluids, chicken soup, and sleep, but that's just because I'm sick. Or possibly a zombie.

So why haven't I updated in three months? Um. Quick, look over there!

Busy. So busy. Busy doing...well, nothing really. Busy with my job (crappy), busy with my writing (nonexistent), busy with trying not to buy so many comic books (didn't work out so well). And now I'm busy being sick and not getting money by working. Bleh.

Comics I've read recently: The Death of Captain America. Ed Brubaker? Awesome. Taking something that might potentially suck (SPOILER - Captain America dies and Bucky has to take over) and making it something excellent? Even awesomer. And for how wrong it could have gone, just compare to the recent Battle For The Cowl that went on in DC, where Batman (SPOILER) died (or maybe not) and (SPOILER, BUT NOT REALLY) Dick Grayson took over for him.

Recent things I should have been doing but have not: applied for other jobs. Written more stories. Submit stories to magazines. Stop buying so many damn addicted comic books so I can save my money, goddammmit.

I saw Watchmen tonight. Some thoughts, in no particular order:

I give it a solid A-/B+. It certainly was ambitious, that's for sure.

Hexakosioihexekontahexaphobia: fear of the number 666.

Thank you and good night.

Yesterday, I watched Enchanted with my mom and then went on my computer and rewatched the recently-back-on-the-interwebs Dr. Horrible's Sing-Along Blog and was struck by the similarities: a niave young woman is caught in a love triangle between a narcisisstic hero and cynical deadpan snarker. Admittedly, Captain Hammer is much, much worse than Prince Edward and Dr. Horrible is waaaaay more problems than Robert, but still. Plus, there's the tone: a character is torn between seeing the world as idealistic-happily-ever-after and cynical-there-are-no-happy-endings. Entirely different outcomes, however, which you can probably guess as one's a happy Disney film and the other is a Joss Whedon production

So, inspired by Bond One Liners and this article in particular (I like the winner of the contest: Flights of angels sing thee to thy rest, pissant.), I created (with a careful mixture of phrases and insults) the Action Movie One Liner Generator.

You have to press the button a few times before it starts working, so it still has some glitches, but I like some of the phrases it puts out. Like, "Here's mud in your eye, motherfucker!" and "Toodles, berk!" and "Bottoms up, peabrain!"

Go watch the first episode! It's awesome! New episodes come out July 15th and July 17th, but they will only be up until the 20th, so watch it now!

I know I didn't recreate the entire conversation accurately, but hey, I work with what I got.
Collapse